One click WordPress upgrades are convenient. They fit right in with how I describe blogging platforms to the uninitiated: They make web publishing simple for people of modest technical means. Some web hosts include the Fantastico module which also allows for one click upgrades of WordPress. I've … END_OF_DOCUMENT_TOKEN_TO_BE_REPLACED Got a call yesterday from a buddy of mine who had just upgraded his blog to WordPress 2.6 and found he wasn't able to get images to align in his new posts the way he did before. No matter what he did the images just displayed one way. I knew right away what his problem was because I'd seen the … END_OF_DOCUMENT_TOKEN_TO_BE_REPLACED 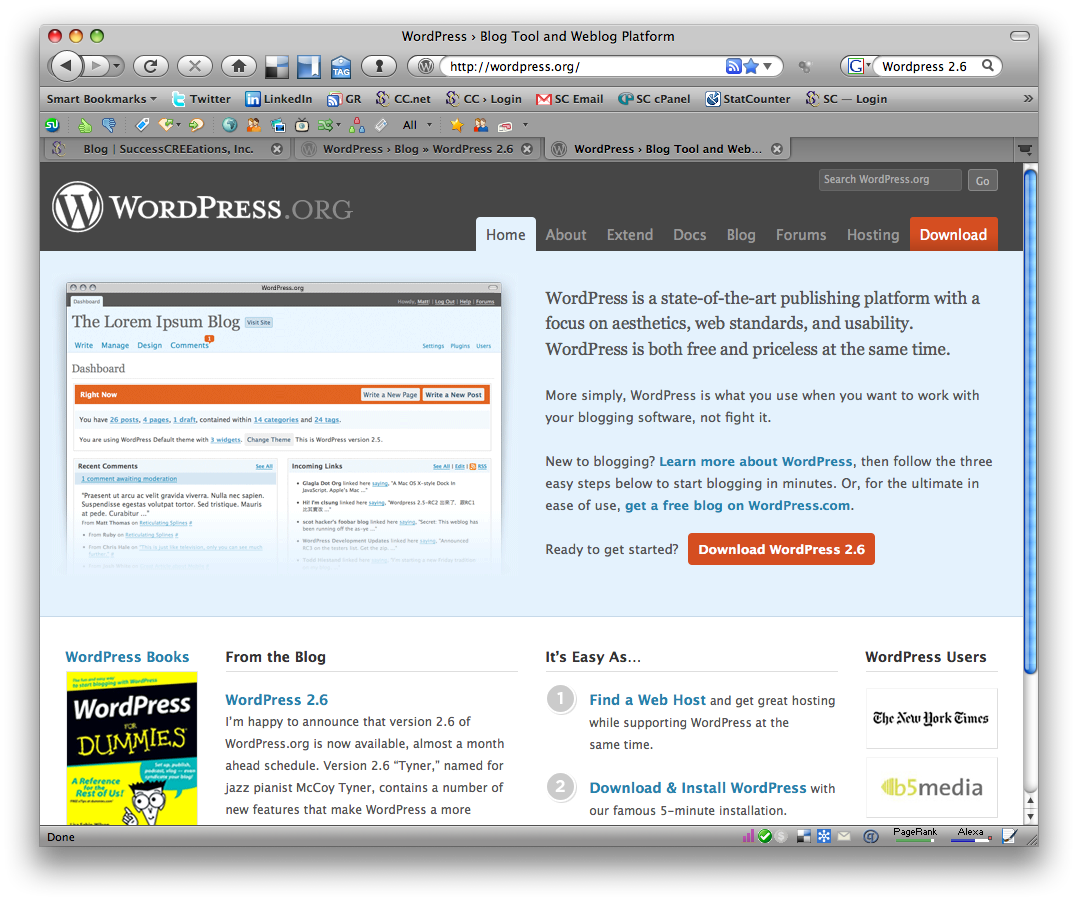 WordPress rolled out their update to version 2.6 the other day with some great new feature improvements. Here's a quick rundown of the new features. WordCount Ever wonder how many words you have in your blog posts? I do. I've been a longtime user of the TD Word Count plugin. But now WordPress … END_OF_DOCUMENT_TOKEN_TO_BE_REPLACED WordPress blogs are starting to get hacked in greater numbers lately. The problem is getting serious enough that the WordPress podcast recently addressed out of date WordPress blogs being hacked. Even my good friend Mark Goodyear went to log into his blog and discovered that GoodWordEditing was … END_OF_DOCUMENT_TOKEN_TO_BE_REPLACED If you are a feed subscriber you might not know. But we've just launched the redesigned SuccessCREEations, Inc. website. There are still some bugs to work out yet and now I'm in the same boat that my clients often find themselves, a new website just begging to be filled with content. Upgrading … END_OF_DOCUMENT_TOKEN_TO_BE_REPLACED

Add Functionality to WordPress with Plugins

WordPress is a powerful web publishing platform. That statement almost goes without saying. Because it is open source there is a tremendous amount of support for the platform freely available out there. And you can really add functionality to your WordPress site by adding plugins. What Plugins … END_OF_DOCUMENT_TOKEN_TO_BE_REPLACED

Spam is the scourge of the internet. Spawn of Satan. Evil incarnate. It's bad stuff. They say something on the order of 90% of all email sent is in fact spam. Blech! Spam Defined For those of you who live under an un-technological rock, here is an excerpt from the Wikipedia Spam … END_OF_DOCUMENT_TOKEN_TO_BE_REPLACED